Between now and 2050, the demand for maize in the developing world will double and, by 2025, it will have become the crop with the greatest production globally and in the developing world (Rosegrant et al. 2008). But harvests at current levels of productivity growth will still fall short of demand; unless vigorous measures are taken to accelerate yield growth, the outcome will be less affordable food for millions of poor maize consumers, continuing childhood malnutrition, deforestation, soil degradation, reduced biodiversity, and accelerated depletion of concentrated fertilizer reserves.

Maize is the basis for food security in some of the world’s poorest regions in Africa, Asia and Latin America. Globally, 765 million metric tons of maize was harvested in 2010 from just less than 153 million hectares. About 73 percent of this area was located in the developing world. Maize is currently produced on nearly 100 million hectares in 125 developing countries and is among the three most widely grown crops in 75 of those countries. The crop provides over 20 percent of total calories in human diets in 21 countries, and over 30 percent in 12 countries that are home to a total of more than 310 million people.

Production of maize, especially in the tropical regions, is affected by a number of constraints, including an array of abiotic and biotic stresses, poor soil fertility, lack of access to key inputs (especially quality seed and fertilizers), low levels of mechanization and poor post-harvest management. The result: maize yields in many of the Sub-Saharan African countries, where maize is the most important staple food, are often extremely low, averaging approximately 1.5 tons per hectare – about 20 percent of the average yield in developed countries – and yields in several Asian countries are still below 3 tons per hectare. In addition, one-third of all malnourished children are found in systems where maize is among the top three crops. 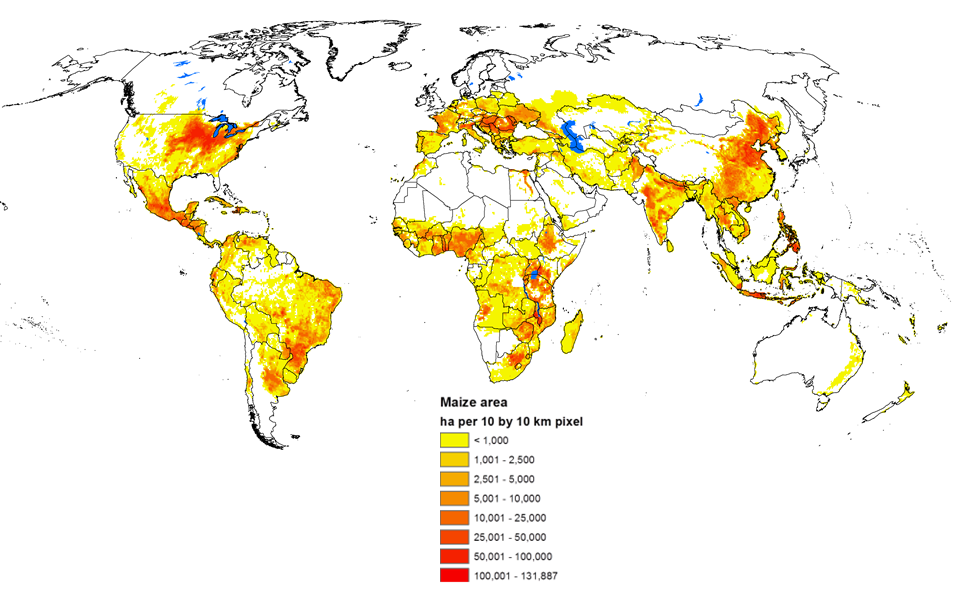 Maize is currently produced on nearly 100 million hectares in 125 developing countries and is among the three most widely grown crops in 75 of those countries (FAOSTAT 2010; Figure 1). About 67 percent of the total maize production in the developing world comes from low and lower middle income countries; hence, maize plays an important role in the livelihoods of millions of poor farmers. They grow maize for food, feed and income in 24 diverse and mostly rainfed farming systems, accounting for about 90 percent of the total area. They are often too poor to afford irrigation and are exposed to significant risks of production and income failure.

So it is not surprising that one-third of all malnourished children are found in systems where maize is among the top three crops (Hyman et al. 2008)1. Often with few other income opportunities than their farmstead, these farmers need options to increase and stabilize incomes from more productive, resilient and sustainable farming approaches that are adapted to future climates. Women play a significant role in maize production and maize-based systems. They need to be more involved in the design of appropriate interventions, and be given access to resources and information that allow them to improve the livelihood of their family.

Competing uses for a staple grain

Affordable food is among the most basic human rights, and in that respect, maize is critical, ranking third after rice and wheat as a source of calories in the diets of developing country populations (FAOSTAT 2010). Cheaper than either of those grains, maize is especially important for more than 900 million low income consumers who live in African, Asian and Latin American countries where maize is among the three most important food crops (Figure 2).

Over the past decade, rapid economic growth in highly populated regions in Asia, the Middle East and Latin America has increased demand from more affluent consumers for poultry and livestock products. Maize grain is a key ingredient in animal feeds, and the added demand has driven up maize grain prices and made it less affordable for poor consumers. The maize feed market is growing especially fast in countries like China and India, where economic growth is enabling many to afford milk and meat. Rapid development in those countries is also driving up demand for maize as an industrial raw material, including use for biofuel.

The market is responding, to the detriment of the environment

Farmers, governments and input suppliers have responded to the expanding demand for maize. During 2003–08 maize production increased annually by 6.0 percent in Asia, 5.0 percent in Latin America, and 2.3 percent in Sub-Saharan Africa (FAOSTAT 2010). Nonetheless, the increases fell short of what was needed to prevent price hikes in 2008. Part of the response to demand has involved bringing new land into cultivation, increasing maize area in Asia and Latin America by 3.5 percent annually (FAOSTAT 2010, referring to data from 2003–08). But FAO estimates that only 12 percent of the future increase in arable land in developing countries can be achieved through area expansion without exacting unacceptably high environmental costs (Bruinsma 2009).

At the current rate of area expansion, maize will eat up “its share of land” in less than five years; henceforth, maize expansion will come at the cost of crop diversity, forests and erodible hill slopes. A significant portion of the production increases is driven by government fertilizer subsidies, rather than by farmers adopting more sustainable and efficient practices. This has led to wasteful use of fertilizer.

Expanding production through subsidized fertilizer has a frightening consequence if one considers that fertilizer prices are expected to increase strongly over the next two decades, as concentrated reserves become depleted (Cordell et al. 2009) and fuel prices increase. If fertilizers are not used more effectively and governments are no longer able to sustain fertilizer subsidies, the world will see food prices escalating much more drastically in the 2020–30s than is currently the case. Fruits and vegetables, together with maize, rice and wheat share almost equal use of three-quarters of all fertilizer applied (Heffer 2009). Implementing more (or less) effective practices in these crops will have large effects on fertilizer reserves, environment pollution and soil depletion.

Market responses and climate change are endangering the poor

Production shortfalls in global maize supplies and increasing input prices have grave consequences for developing countries. Along with prices of other commodities, maize prices have more than doubled over the past 10 years (Index mundi 2010) and may do so again by 2050. Such increases will impose great hardships on the poor, as the food price surges of 2008 and 2010/2011 made abundantly clear. In addition, lagging domestic production will place a huge and politically risky burden on developing country economies, driving up their maize imports from 5 percent of today’s demand to 24 percent in 2050, a proportion that will be priced at around USD 30 billion (Rosegrant et al. 2008).

Even more worrisome, events between 2008 and 2011 showed that food price developments are much more complex than had previously been assumed. Global food price changes are affected by energy prices, through their impact on input prices and increasing demands for biofuels, and increasingly by production conditions and profitability assessments of crops in a relatively small number of global “bread baskets.”

Moreover, traditional market behavior may have been derailed by the speculative decisions of millions of financial market participants and panic responses of governments with inadequate access to accurate production and demand information. Maize prices in 2011 were already as high as had been previously predicted for 2050, based on long-term supply/demand projections. Markets lack transparency due to inadequate production/stock/demand estimates and high private sector involvement. Actual or perceived physical stocks have fallen so much that even relatively small production fluctuations cause major price fluctuations.

Nearly 60 percent of global maize production comes from just two countries – the USA and China – even while maize figures among the top three food staples in 56 low- and middle-income countries. Poor harvests in a major US or Chinese bread basket have caused much of the production variation in the past (Figure 3); with depleted global stocks, such perturbations could imply political turmoil for many maize-importing countries. It seems that the realities of financial markets and human behavior have overtaken the economic ideals of comparative advantage and unfettered international trade. An excessive focus on a few bread baskets has exposed us to an unacceptable risk that affects the poor and political stability.

More on: Maize in the Developing World: Trends, Challenges, and Opportunities