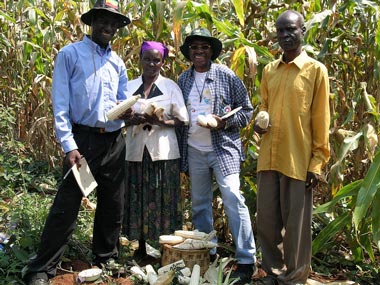 Gender relationships are embedded in complex social systems, generating status, power and decision-making roles that result in a gender-based division of labor, control and access to resources and incomes, preferences and needs.

Consequently research interventions may affect the welfare and poverty conditions of men and women differently, and efforts are needed to address gender-specific issues and disparities.

While men are often regarded as household heads and the primary providers for families, women in many maize-based systems in Africa, Asia and Latin America invariably contribute a major proportion of the labor in planting, weeding, harvesting and processing as as well as adopting the role of the primary caregiver for the family. Women often work longer hours than men and have much less access to land credit, information or extension advice, yet female-controlled income often correlates to better welfare outcomes within the household.

Women’s access to key resources, including land, is commonly determined via their relationship to a husband or father. The fact that women play a major role in production in smallholdings but may not control the proceeds of their labor is detrimental to the well-being and food security of children and other dependents. Examples such as the proactive inclusion of women and disadvantaged groups in community-based maize seed production in Nepal or during participatory variety selection in Ethiopia and Mexico show that research can influence established community patterns for greater research-for-development outcomes (Hellin et al., 2010; La Rovere et al., 2008 and 2009; Mathema and Gurung, 2006).

With an increasingly aging farming and agricultural research community, partners also strongly raise their voice for more proactive engagement of younger professionals and farmers as they will to a great extent determine the effectiveness and adoption of research-for-development interventions.

MAIZE will take specific steps to understand gender-based dynamics and differences, and leverage this knowledge so that interventions will address gender-specific needs, promote options that create opportunities and empower women and young adults; and foster strategies that change prevalent attitudes and mindsets to enable equitable and inclusive growth.

Read about our strategy for integrating gender into MAIZE.